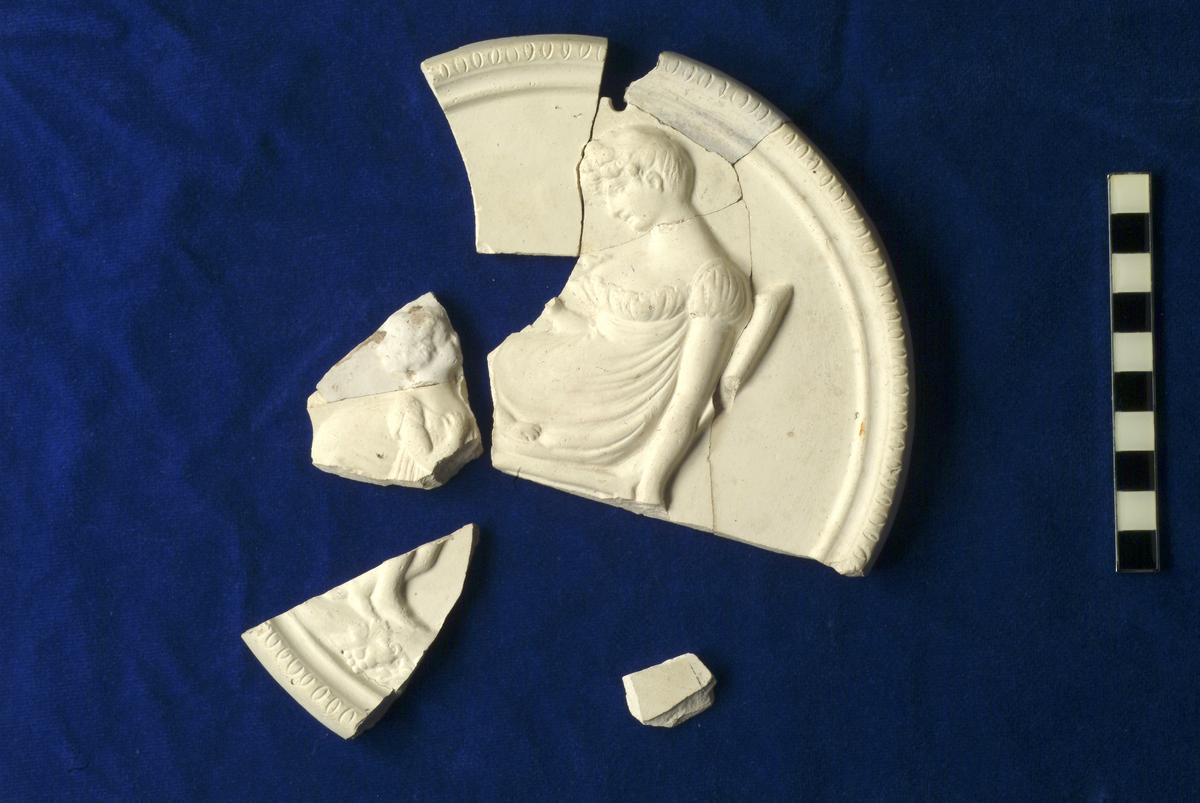 This plaque was made by Jonathan Moreton, an early convict potter. It is a unique finely crafted object with a hole at the top for hanging on a wall. The plaque was manufactured by John Moreton between c.1835 to 1837. The basemark on the back ‘J.Moreton/& Sons/Potters/New South Wales’. This is one of two known survive Moreton-made objects with basemarks which are not stoneware bottles. While the plaque at first appears to be imitative of Wedgewood-style products it does not present a classicising image but is rather a mother dressed in Regency-period clothing reading a book with a child kneeling at her feet.

This plaque was found in a well in The Rocks in land once owned by Elizabeth Boulton née Sandilands. It is likely Elizabeth and Thomas Boulton were the original purchasers and owners of the plaque. Elizabeth was given this land by her mother Ann Sandilands who died 2 January 1809 by drowning. Ann appears to have arrived on the Lady Penhryn as part of the First Fleet in 1788. The 1828 Census records Elizabeth’s age as 38 indicating she was born c.1790, two years after her mother arrived. She attended the Sydney Female Orphan School where her mother Ann worked as a cook. Elizabeth married on 10 September 1806 to Thomas Boulton jnr who arrived in 1801 on the Minorca. Thomas Boulton was a stonemason. The plaque is a representation of nurturing motherhood, possibly seen by the owners to represent Elizabeth Boulton when she was younger and gave birth to one of her 12 children, only four of which appeared to have survived until her death in 1866.

Thomas died in June 1837 and Elizabeth died in June 1866. Elizabeth lived for many years after the death of Thomas, the plaque was most likely associated with her and her long connection with this site. Being a purely decorative item, hanging on a wall, it would have no doubt lasted for many years after its initial manufacture before it was eventually knocked, dropped, broken or simply discarded, hence its appearance in a deposit believed to have occurred in the c.1870s and prior to the house having been demolished c1882.