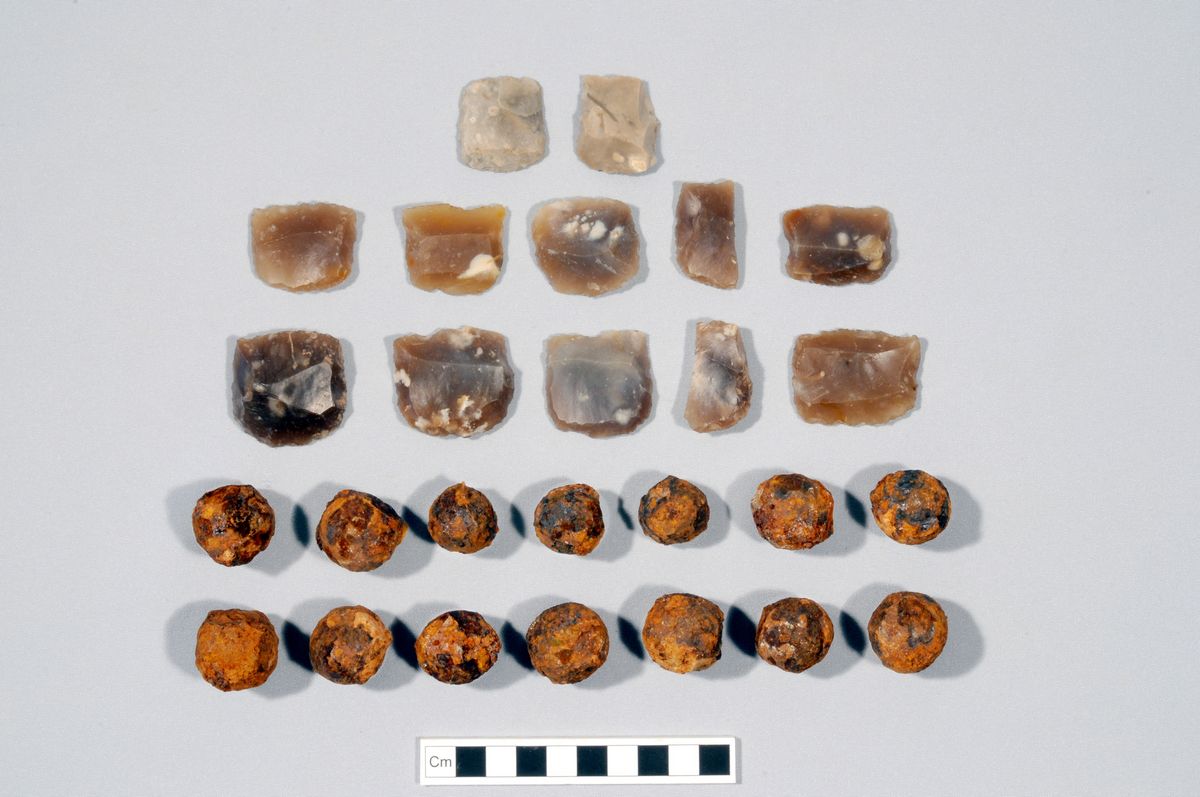 These artefacts were found during excavation the bomb-proof chamber and adjacent courtyard of Fort Phillip, now Observatory Hill, Sydney in 2008 and 2010. The Fort had a commanding view of Port Jackson above Sydney Cove but was never completed and only briefly occupied from 1804 to 1806. Such gunflints and iron grapeshot were state of the art munitions of the British Royal Navy during the late 18th century. They came aboard one of the earliest ships to Australia and are the product of the arms race between the colonial powers of Britain and France leading up to the Napoleonic Wars.

Cannon or ship carronades were carried up from ships to the partially-finished Fort and mounted facing inland. They were never fired in anger. These objects are also witness to a particularly tense period in the early colony when the small military force was anxious to secure the harbour town from the threat of an Irish-led convict rebellion that first erupted at Vinegar Hill (Castle Hill) in March 1804.

The gunflints were used in flintlock weapons to create a spark that lit gunpowder which in turn provided the explosive force to fire one or more shot balls down the barrel. The smaller gunflints were suitable for muskets, the larger for rampart guns or carronades. Several were found broken and clearly re-used to light fires for cooking or heating at the Fort. The top two basic spall or flake gunflints were probably made in England or Europe by direct percussion of grey flint cores from c1780. Below them are ten brown French gunflints efficiently made on snapped bladelets and finished by trimming the lower edge into a convex heel. French gunflints dominated the market from c1740 and although the technique was a guarded secret a number of English gunflint knappers apparently did learn the skills.

The gunflints from the Fort were probably stored in a British arsenal before being transferred into ships’ stores. When trade in French flint and gunflints was prohibited at the outbreak of war in 1790 English knappers had to quickly develop their techniques and local mines were expanded. This resulted in an even better double-edged rectangular gunflint type of English black flint that were used in Australia well into the 1860s but have not been discovered at Fort Phillip. Similar spall and French gunflints can be found at numerous contemporary sites in eastern USA and Canada, and on vessels wrecked off eastern Australia, such as the British HMS Pandora, and the French L’Astrolabe and La Bousolle.

Each cast iron shot has a diameter of 1 inch (25cm) and were intended to be fired in groups numbering 9 to 24. In order to do this they were stacked in layers on a circular wooden or metal base around a central vertical spindle and then covered in a canvas bag which was looped and tightened by a ‘quilting’ line (twine). After c1800 the bag was smaller and fully quilted. Other organic stuffing materials were added at the top to improve the shape. Several small groups of shot were found at Fort Phillip, perhaps waiting to be made into quilted grapeshot or revealing the location of completed bags long rotted-away.

Note: There are many other websites.