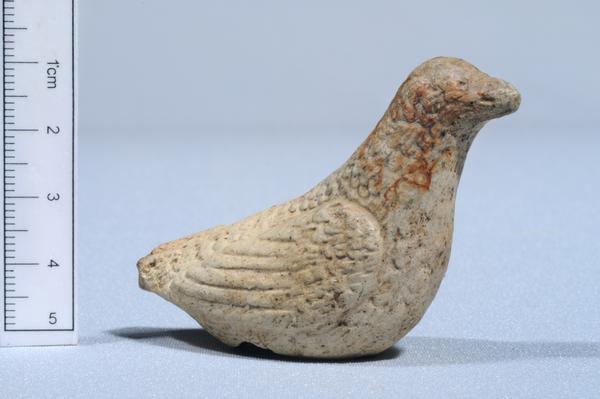 This small clay bird whistle is in the shape of a pigeon came from an archaeological site in Haymarket in Sydney. The belly would have been plugged and possibly filled with water and blown from the tail to make a whistling sound. The bird shape was made with a 2-part mould with the feathers, eyes and beak details cut using a sharp tool.

It was found in a 19th-century drain at 710-722 George Street, Haymarket, part of the former Brickfields. With a broken tail and worn surface details this little fellow may have been played for a long time before being discarded or lost. The whistle is thought to have been made by convict potter Thomas Ball whose more than 600 kilo of kiln wasters were dumped in various pits and hollows on the site.

To make the bird hollow a rectangular object or moulding stick was sunk into the belly of the bird, creating an oval-edged hole. Then a small circular hole was vertically pierced through the top or lower back until it broke through to one end of the lower hole; lastly a narrow rectangular channel was pushed horizontally from the end of the tail until it reached one side of the upper hole.

The same clay was also used by Thomas Ball to make clay marbles and some of his lead-glazed pottery. Inventive techniques of clay manipulation and carving were also utilised to make unusual clay reed pipes that appear to have a strong American influence on their manufacture. After research the closest comparable form to this whistle were those made in the USA during the Civil War.